The Legend Of Ralph Legeman

(Note: This photo and all other photos (except the last photo) in this thread can be found on http://local.evpl.org/ I encourage all lovers of Evansville history to visit this site)

One hidden treasure that we are blessed with here in Evansville is the work of local architect Ralph Legeman.

Mr. Legeman wasn't just any architect, he was an innovator, a creator, a pioneer, and now he is a legend. Ralph Legeman began his architectural career in 1922 designing general buildings and enjoyed a successful career doing it.

Little did Ralph Legeman know, his life would change dramatically in the 1940's. Beginning in 1946, Mr. Legeman began having many sleepless nights. Several school officials from around the Tri-State had been approaching him in the hopes that he would be able to design them a gymnasium that had a high capacity but with a low cost. Although Mr. Legeman desired sleep, he was constantly staying awake with facts, figures, and designs floating in his head...

Finally after many sleepless nights, Mr. Legeman began drawing up plans that would reshape the entire world of sports architecture. He began a whole new era designing what is known here in Indiana as a fieldhouse. Basically Mr. Legeman designed his gymnasiums with these basic traits...

1. The bowl is below ground not at ground. Mr. Legeman believed that digging into the dirt instead of building up to the sky would dramatically save on material costs. This belief was repeated for Roberts Stadium during its renovation in the 1990's.

2. When spectators walk into a gymnasium, they are at the top of the lower level. If they want a front row seat, they would have to walk to the bottom. This keeps late arrivals from distracting the crowd as they came in.

3. The vast majority of Legeman's gymnasiums had pin-type steel trusses that were bent at almost a forty-five degree angle from the playing surface (Look at Roberts Stadium). This angled roof saves dramatically on costs when compared to a modern arena where roofing materials must cover the entire bowl of the arena from the top of one side to the top of the other.

Mr. Legeman's design became so successful that he would eventually design 27 bowls for high school and college arenas/gymnasiums and license 10 others. According to chopperinu of IllinoisHighSchoolSports.com, Legeman designed or licensed bowls in the following cities...

While designing Roberts Stadium, Legeman incorporated many of the same characteristics that he was implementing in the current North High School's gymnasium at the same time. If you visit North's gym, you will notice the same color brick, the same style roof, and a very similar (although much, much smaller) interior design.

Legeman was so in love with Roberts Stadium's design that he decided to replicate his own house here in Evansville to look like a miniature Roberts Stadium...

The New Castle Fieldhouse just happens to be the world's LARGEST high school fieldhouse! Next door to the fieldhouse, is the Indiana Basketball Hall of Fame...

For those of you who have been to these fieldhouses, have watched the movie "Hoosiers", and/or have gone to places such as Conseco Fieldhouse, Hinkle Fieldhouse, and the Pepsi Coliseum, you know just how huge the fieldhouse movement was to the game of basketball in Indiana.

The saying goes, "In 49 states it's just basketball, but this is Indiana." You can thank Mr. Legeman's fieldhouse design for that. No other image is more synonymous with Indiana basketball than that of the fieldhouse. No other state can lay claim to bigger gymnasiums than Indiana thanks to Ralph Legeman.

The great thing about it is that we are Mr. Legeman's hometown. He invented the fieldhouse design right here in Evansville. Why aren't we taking advantage of that? How many other famous and great things can you name that were designed here in Evansville. I feel guilty for saying this but I can't think of any. Sure we've had innovations in plastics, manufacturing, and basic architecture. We've even built the biggest flag. However, nothing ever designed in this town has ever transformed its industry more than Ralph Legeman's basketball arena design.

This begs the question: Why are we wanting to demolish the biggest fieldhouse designed by Legeman in his own backyard? To demolish Roberts Stadium would be to spit in the face of both Hank Roberts and Ralph Legeman.

It is my belief that whatever we do with Roberts Stadium MUST pay tribute to both Hank Roberts and Ralph Legeman. Their stories need to be told at Roberts Stadium. Personally, I'd like to see two statues with plaques, photos, and biographies around them.

Earlier, I told you that Hank Roberts has placed your name on the top of his list to help save Roberts Stadium. Now, I am asking you to fight for everything that Ralph Legeman has given us!

(photo courtesy of the Evansville Courier & Press)
Posted by Jordan Baer at 7:42 PM 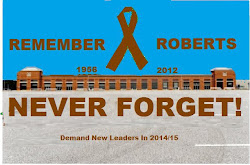 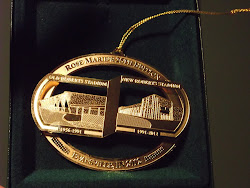 Remember Roberts Stadium With The Book Trophies And Tears

Read My Reviews At Stadium Journey 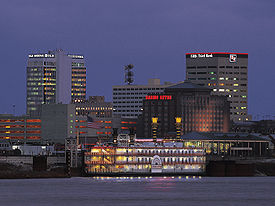